Something Red Podcast w/ CC and Me

In case you missed the interview the first time around, I'm posting a link to this Something Red (Bloody Good Horror) podcast. CC asks great questions and offers brilliant insights while I yammer about urban legends, the Thai legend that prompted the third section of my novel Knock Knock, the importance (and inevitability) of reading the right book at the right moment, self-promotion, genre labels, and the strange man who lived down the street when I was seven...

Thanks for listening!
Posted by S.P. Miskowski at 12:38 AM No comments:

As of today you can pre-order my chapbook Stag in Flight (illustrated by Nick Gucker) from Dim Shores Press.

"Pre-order for Stag in Flight (S.P. Miskowski, Nick Gucker) is now open to all and sundry, and this dark little chapbook will officially be released at the H.P. Lovecraft Film Festival in San Pedro on Saturday April 30. S.P. and Nick will be at the Dim Shores / Word Horde table that afternoon, come by to get a personalized copy! (If you can't be there, S.P. and Nick will sign yer pre-ordered copy too.)
Limited to 150 hand-numbered copies, with cover design by Matthew Revert. Comes with a print of slightly darker cover art and a 3.5" sticker. The sticker is black ink silkscreened on vinyl for durability and it looks killer." 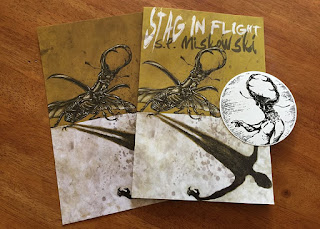 The Numbers of the bEast

He is awake and walking toward the park. He doesn’t know how long this will take.

On an adjacent street a child is counting marbles, dropping colored globes into a leather pouch. The child counts to nine and stops to marvel at the final treasure, indigo cyclone in the palm of his hand.

In the alley behind the butcher shop the child’s father finds a shoe heel. He stands for a minute with his arms crossed staring at the ground. His wife, five years deceased, would have known what the heel meant and how dear it was and what it cost the woman who lost it. Practical dead wife, she might have also said, “This is common among women, throwing away a broken shoe, nothing to worry your sleep.”

At another intersection down the street, and he can’t say which one, the lights burn warmly enough but the shape of the road—a zigzag before the path runs north again—makes him dizzy until he reaches the next corner. A keen sense of vertigo seizes him, the revulsion and simultaneous, voluptuous wish to fall. He finds in the zigzag motion a sensation of being pulled or swept sideways. Once in a wind storm he had his feet knocked out from under him, had held tight to a lamp post and watched a rooftop tumble up the hill and bounce over a house. It landed with a squelch of pigs, mud, and manure in the garden.

He wonders if the rooftop, intact yet once free to roam the windblown neighborhood, is still buried in the garden. No one came to claim it. No one volunteered to excavate the site. In some dreams he scuttles down into the pit and sinks until his bare feet touch the shingled surface. In murky water he walks the length of the roof, willing the house to materialize beneath his footsteps.

Nothing you do while sleeping is beyond your will. (This mantra accomplishes what merely knowing cannot. Practice every day for seven minutes and continue.)

He buys a clock and sets it. He notices how meticulously and quietly the gears move in their gold case. This is the sort of object he knows he ought to revere and save but all he can think is how much he wants to throw it away. Throw it the fuck away. He searches for a bus or a train station or a familiar face.

A girl with a toy hoop dashes across the pavement. She stops before a crowd of pedestrians. A woman wearing a long apron over her dress shouts a name and the girl runs faster.

He is headed toward the park. On days like this he follows the custom of neighbors and the nagging instinct in his ribs. Pulling or sweeping, he doesn’t know which.

Each child received a cure, one with medicine, one with mesmerism, and one with an excess of love. Let the mimed gestures of affection represent love. Let slumber dragging the limbs of a man underground, a man who is unable to sleep suddenly sleeping and falling under, and this is mesmerism. The medicated ones limped home eventually, rueful smiles tilting their lips, apologizing to mothers and siblings for the long, silent absence of their youth.

He walks toward the crowd of children in the park. He has so far to go.

Ahead the pavement will zigzag. The stones underfoot are smooth, stolen from the beach and carried to the city in horse-drawn wagons. Workmen kick them aside when they climb from the scaffolding to the ground. Every house is under construction or reconstruction. Every apartment is either expanded or converted to storage.

He is afraid he will reach the zigzag and it will enfold him. What if his mantra isn’t enough to ward away—what is this, evil or inclination? (When Mueller sent him home, he didn’t say. He only said the mantra and then he said goodbye.)

“Nothing you do while sleeping is beyond your will. Yet you have a deep intuition, telling you this is nonsense.”

He wakes up with a small scar on his ring finger. He walks toward the park to the noise of strangers, terrible and thrilling, drowning him, dragging him under to the sickening sweet odor of surgery. He floats, in this one, in the direction of the park and the swings, and the screaming in the overlapping shadows between trees.

Denizens of the Hyde Hotel

This week Priya Sharma turns a spotlight on the editors and writers of The Hyde Hotel. Each story is connected to a very peculiar hotel and some of the stories overlap in strange and interesting ways. I'm delighted to be included in this anthology published by Black Shuck Books.

Don't miss this glimpse beyond the shadowy lobby of The Hyde Hotel. 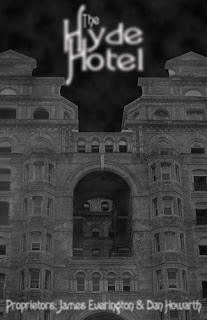 Where You Can Find My Stories in 2016

This is a round-up of the stories I've sold recently. The following are scheduled for publication this year.

"Water Main" will appear in the anthology Autumn Cthulhu edited by Mike Davis, due to be launched in April. And I'll join Mike and the Lovecraft eZine podcast panel for a chat on July 17th.

"Three Potato, Four," my Frankenstein tale (with ties to one of my favorite stories, T.E.D. Klein's fascinating and disturbing "Petey") has been accepted by Joe Zanetti and Kurt Fawver, editors of Monsters, Rebuilt. The anthology will be published by April Moon Books.

"Asking Price" is set to appear in the anthology  Darker Companions: Celebrating 50 Years of Ramsey Campbell published by PS Publishing. The editors of this tribute to a master of horror are Scott David Aniolowski and Joseph S. Pulver Sr.

"Passages for the Dying and the Dead" and "In Waves" will be in Leaves of a Necronomicon edited by Joe Pulver. My origin story for Doctor Graham, a minor character in the Skillute Cycle novella Delphine Dodd, "The Resurrected" has been accepted by editor Nate Pedersen for Sisterhood. Both Leaves and Sisterhood will be published by Chaosium.

The Hyde Hotel is published by Black Shuck Books and edited by James Everington and Dan Howarth. The anthology includes my story, "Lost and Found."

Dim Shores is publishing my story "Stag in Flight" as a chapbook illustrated by Nick Gucker. Nick and I will be signing copies of the chapbook at the H.P. Lovecraft Film Festival and Cthulhucon in San Pedro on April 30th.

Dunhams Manor Press has added my novelette Muscadines to their limited edition hardcover series illustrated by Dave Felton, to be published next month.

As for last year's publication credits... The following anthologies are available. 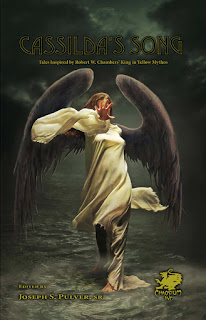 Simon Dewar Interviews Me for Women in Horror Month

At his blog this month Simon Dewar has generously put a spotlight on several women who write horror. Today the lucky interviewee is me! Check it out here, and be sure to browse and read more of the interviews.

Skillute Cycle paperbacks are on SALE

For a limited time publisher Omnium Gatherum is offering the paperback edition of my series the Skillute Cycle at a reduced rate. Follow the link to the OG page where you'll find a description of each book and a link for purchase. 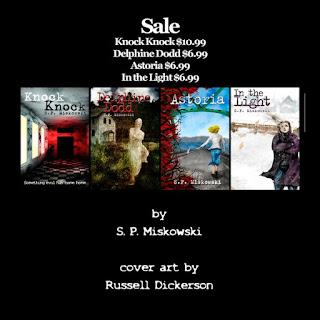 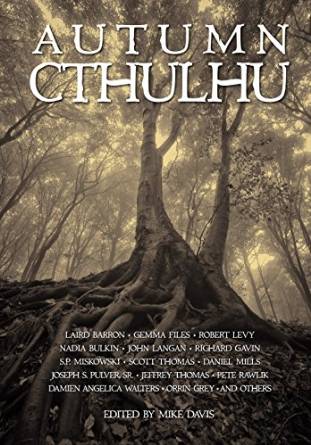 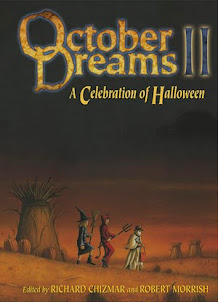 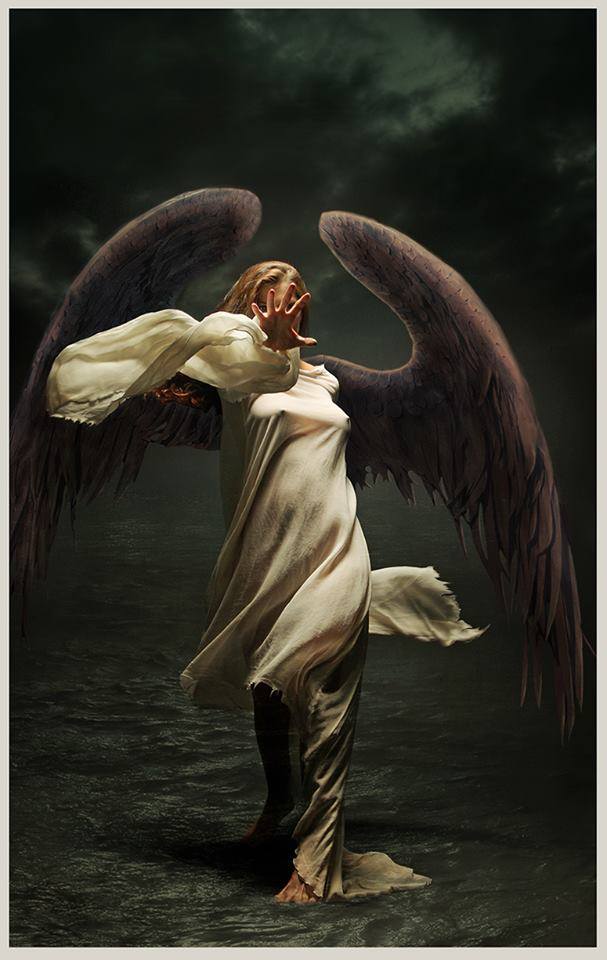 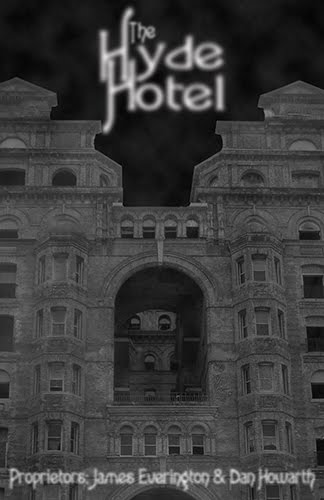 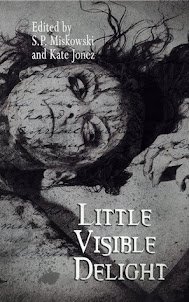 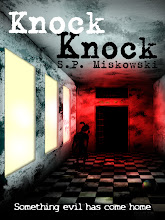 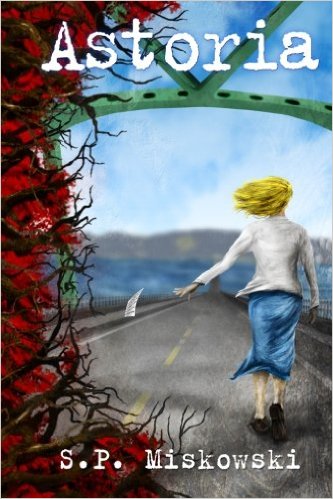 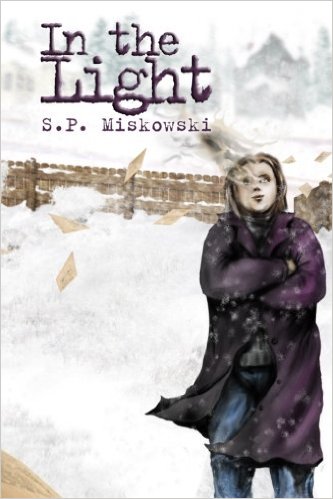 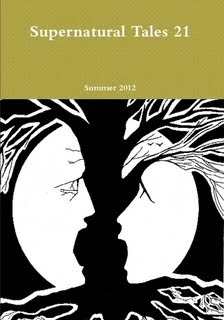 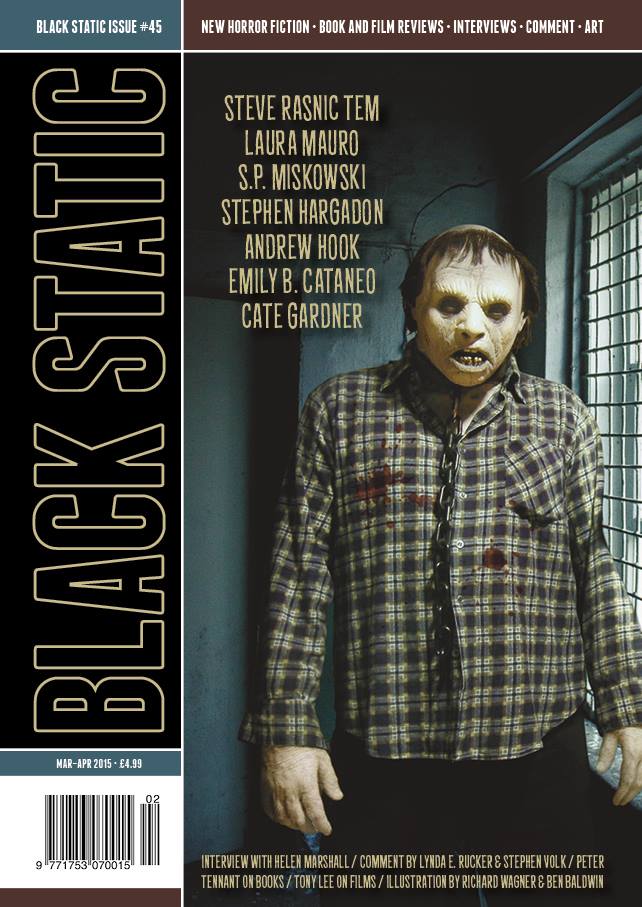 S.P. Miskowski
S.P. Miskowski's debut novel Knock Knock and her novella Delphine Dodd were finalists for the Shirley Jackson Award. Both books are part of the Skillute Cycle which includes two more novellas, Astoria, and In the Light. All four books are published by Omnium Gatherum in Los Angeles, with cover art by Russell Dickerson. Rated by critic Peter Tennant as "one of the most interesting and original writers to emerge in recent years," Miskowski has been published in Supernatural Tales, Black Static, Identity Theory, Other Voices, and the anthologies Detritus, Little Visible Delight, October Dreams 2, Cassilda's Song, and The Hyde Hotel. Her work has received a Swarthout Award and two National Endowment for the Arts Fellowships. Dim Shores is set to publish Miskowski's "Stag in Flight" as a chapbook with cover art and illustrations by Nick Gucker. Her novelette "Muscadines" is included in the Dunhams Manor Press hardcover series, with cover art and illustrations by Dave Felton.